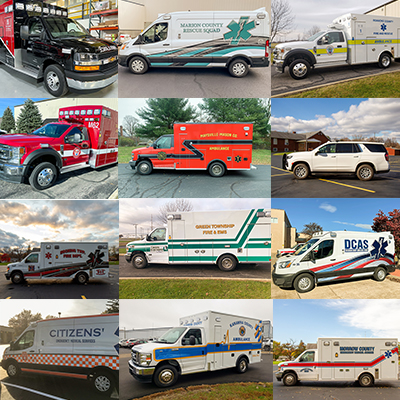 Today, there are many different ambulance types to fit the everyday needs of first responders. However, the earliest known patient transport goes back to the middle ages, when those infected with leprosy were forcibly removed from their homes. The word “ambulance” stems from the Latin “ambulare,” which means to walk or move around. This refers to lifting or moving a patient,  originally referring to the movable hospital that would follow an army to be easily set up and taken down.

In the years following World War II, ambulances in America were station wagons converted to simply transport patients to a hospital while offering basic life support. In the 1970s, ambulance design began to evolve and heavy-duty truck chassis were used to carry the weight of newly developed medical equipment as advanced life support and on-site critical care became the new normal. The design grew with the rise of the modern emergency medical service (EMS) profession. Now, ambulances are not only different sizes, but are also equipped to serve different functions.

There are three main sizes of ambulance vehicles: Type I, Type II, and Type III. Type I and III ambulances both have a square patient compartment mounted onto a chassis. The main difference between these two types is that Type I ambulances are mounted onto a truck chassis with a cab layout similar to a pickup truck. Type III ambulances are mounted onto a cutaway van chassis. Type I ambulances have a smaller pass-through from the cab to the patient area. The Type III model has a larger, doorway-like opening that facilitates easier movement of equipment and materials from the cab to the rear of the vehicle. These two types of ambulances allow first responders to provide the highest level of care to patients during transport.

The Type II ambulance is a smaller scale emergency vehicle. Rather than having a patient compartment mounted onto a chassis, the Type II models are vans converted into ambulances. The only modification is a raised roof to provide more headroom for the paramedics providing patient care. While Type II ambulances used to be more common, they are now mostly used by ambulance services to transport patients between medical facilities, rather than providing emergency care. They are usually designed for a basic level of care and operate in non-emergency situations.

In countries outside of the United States, Type II ambulances are more common because of narrower streets or more densely constructed cities.

In addition to the differing sizes of ambulances, they can also be outfitted for varying functions and different scenarios that EMS providers may encounter.

Isolation ambulances are designed to transport patients who have been exposed to dangerous radioactive, biological, or chemical contaminants. They also are used to transport patients who are infected with highly contagious diseases. These ambulances will have special isolation equipment and air filtration systems. The crews for isolation ambulances receive hazmat training and are familiar with protocols for dealing with emergencies involving dangerous materials.

A basic life support ambulance is utilized in situations where a patient is not suffering from a life-threatening condition or injury. Crews are trained to administer first aid and control minor bleeding while preparing the patient for transport to a hospital. They are also trained to assess the patient’s condition and, if necessary, summon an advanced life support ambulance.

Advanced life support ambulances are dispatched for critically injured people or those who require specialized medical care during transport. Sometimes these ambulances are referred to as “mobile ICUs” due to the advanced medical equipment on board.

Multiple victim assistance ambulances are present at sporting events, concerts, festivals, or any large gatherings. They will be supplied with equipment for minor injuries such as cuts and broken bones or to treat dehydration. They primarily function as mobile first aid stations and can accommodate many patients at one time. As with a basic life support ambulance, if a patient has a very severe injury, the emergency medical technicians (EMTs) will call for an advanced life support ambulance.

Ambulances can take on other forms, as well. All-Terrain Vehicle (ATV) ambulances are used in areas with rough terrain. Helicopters function as air ambulances to avoid traffic and transport patients quickly. They are also used to retrieve injured individuals who are too remotely located to be reached by an ATV ambulance. Ambulance boats are frequently used in coastal areas with an abundance of water recreation. In some of the densely populated cities in Asia, motorcycle ambulances are common. The patient compartment is a separate container that is towed by the motorcycle.

Most fire department vehicles in North America carry basic medical supplies and firefighters are trained in basic first aid. However, fire departments do not offer patient transport services and therefore do not count as ambulances.

Manufacture and Construction of Ambulances

Ambulance construction is a two-stage process. The first part is the manufacture of a truck or van chassis, including the driver’s area. In the United States, these are usually Ford or Chevy models. In other countries, ambulances can be constructed from Mercedes-Benz, Nissan, or Toyota chassis. The chassis then goes to the next stage of construction at a second-stage manufacturer. The second-stage manufacturer transforms the chassis into an ambulance with the addition of the patient module, interior equipment such as oxygen and defibrillators, and emergency vehicle accessories like lights and sirens. This is accomplished either by coachbuilding (all the vehicle’s modifications are constructed from scratch onto the vehicle) or a modular system (a pre-built patient compartment is attached to the chassis).

Ambulances are almost always powered by an internal combustion engine fueled by gasoline, diesel fuel, or liquefied petroleum gas. The choice of fuel is mostly determined by the locally available options. Gasoline engines are preferred in colder climates where diesel engines can be difficult to start.

American standards concerning ambulance design have been in place since 1976. The standard is published by the General Services Administration and is known as KKK-A-1822. The standard has undergone numerous revisions and is currently known as KKK-A 1822F. The National Fire Protection Association published an alternative standard known as NFPA-1917. Some states specify which standard must be adhered to, while others have no requirement. Other states allow the final user of the ambulance to decide which standard to adopt.

Penn Care is Here for Your Ambulance Needs

Penn Care has over thirty years of experience in the medical supply industry and can help you find the right ambulance, whether you’re adding to an existing fleet or making a first time purchase. We handle multiple brands such as Crestline, Braun, and Demers Ambulances. We offer demo ambulances, specialty emergency vehicles, and even pre-owned ambulances.

Not only can we guide you through your ambulance purchase, but we also offer repair and maintenance on your vehicle as well. Our Mobile Service Technician will come to your location so you don’t have to come to a service center. To learn more about our ambulance types, or any of the products we offer, contact Penn Care today!